I’ve always been a space geek, interested in astronomy and cosmic travel.  Recently I’ve become obsessed with a new space-related hobby – downloading images of the Earth as signals from weather satellites! I call this hobby “selfies from space” because the images are created in real-time; if the images’ resolution were greater and you had the ability to zoom in sufficiently, then you could see me standing outside with my antenna capturing the images.

I first became interested in this hobby because I had purchased a $20 RTL-SDR (Software Defined Radio) on a whim many months ago, and decided to finally make some use of it. I did some research online and found that it was possible to capture satellite downlink data using my radio with an antenna tuned to receive the correct radio frequency. This means that the legs or poles of the antenna must have a specific length in order to resonate or vibrate at the desired radio frequency. The principle behind this resonance is similar to the phenomena of a tuning fork: when a vibrating tuning fork is placed near a stationary fork, the stationary fork begins to vibrate at the same frequency as the vibrating fork. A simple antenna design I found online which would work for this purpose is called a V-dipole antenna (https://www.rtl-sdr.com/simple-noaameteor-weather-satellite-antenna-137-mhz-v-dipole/).

This antenna is a half wavelength design, which means each pole is as long as the quarter wavelength of the desired frequency. If we take the speed of light (300,000,000 meters/sec) and divide by the desired frequency (137,000,000 hertz), we get 2.1898 meters as the wavelength and .54 meters / 54 centimeters as the quarter wavelength. I bought some aluminum rods at the local Home Depot and cut them to the quarter wavelength in the TCMS metal shop; I couldn’t find a “Choc block” at Home Depot to tie the rods together, but I did find some aluminum grounding bars which worked as an acceptable substitute. I then mounted the grounding bars to a 2″x4″ piece of wood with 120º angle between each bar, inserted the cut rods into the bars, and attached a stripped piece of 50Ω coaxial cable between the grounding bars and my radio. 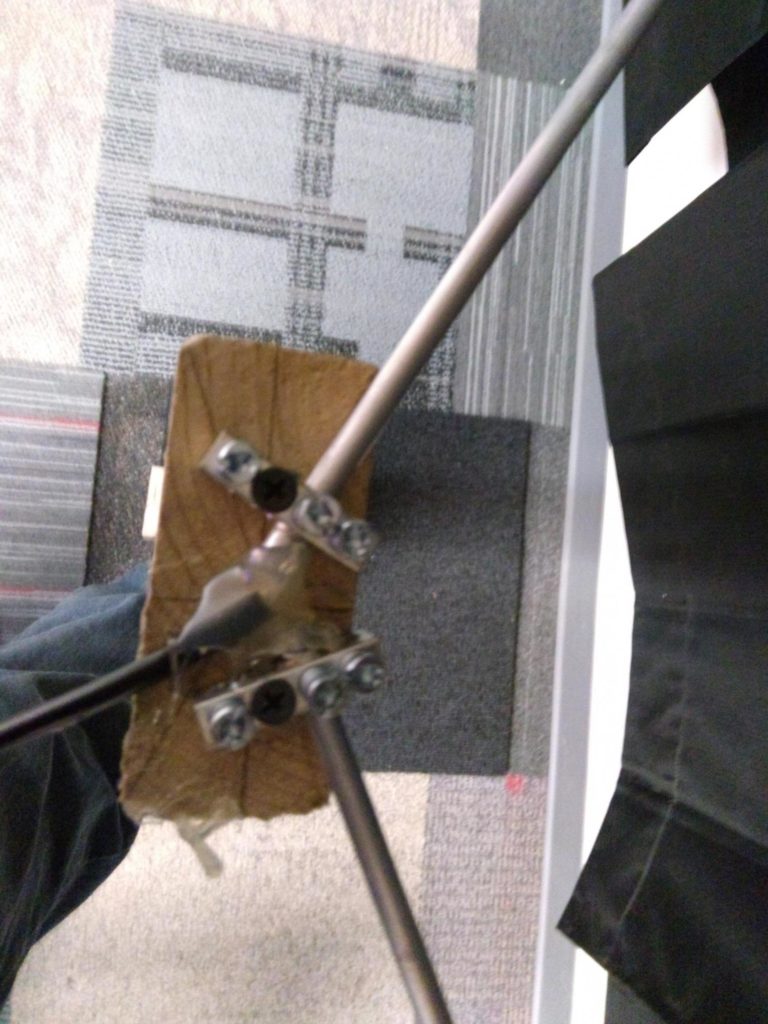 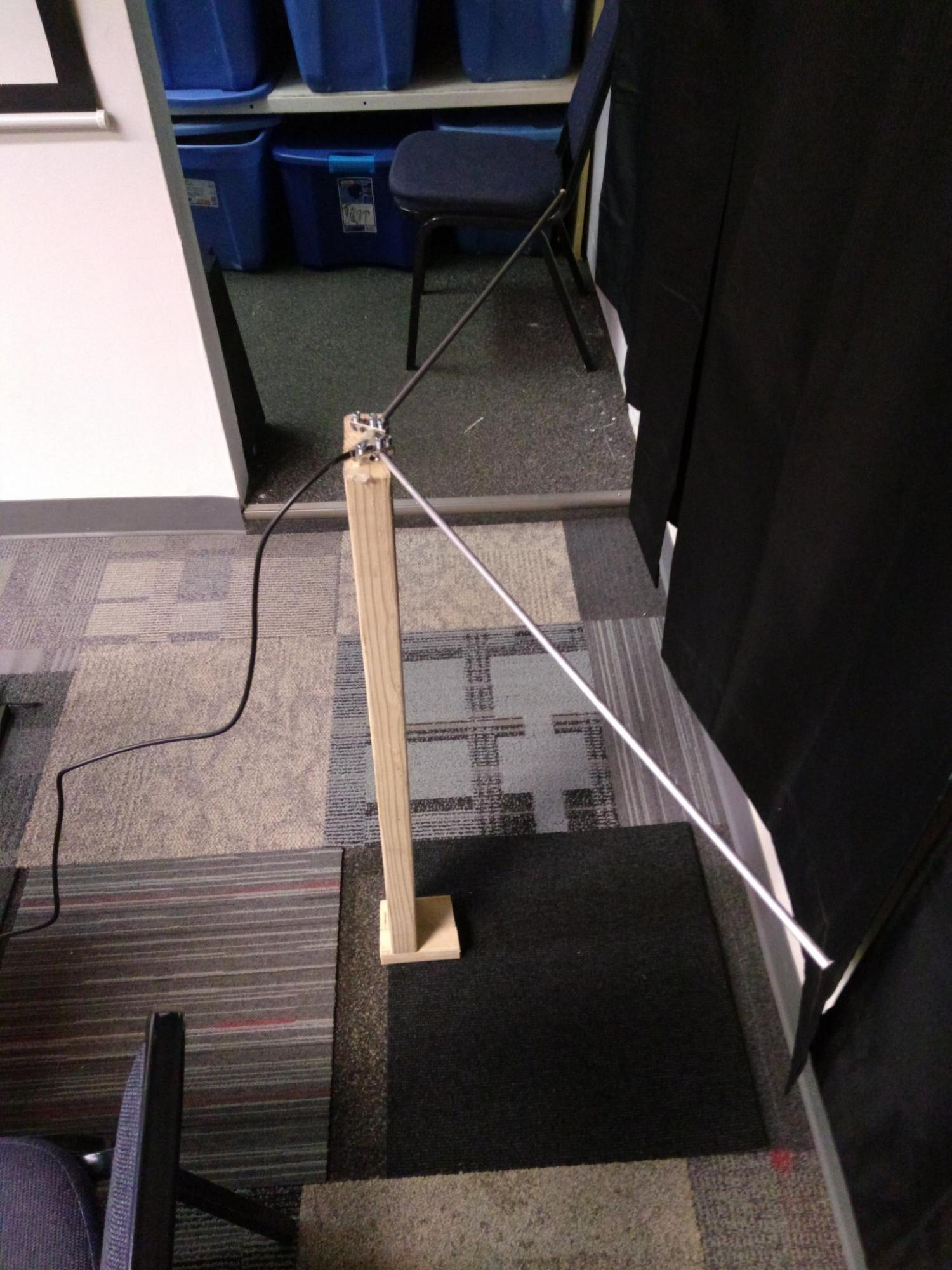 The software which I use to control the radio and record the signals is called SDR#. You can download SDR# here as one package, complete with many useful plugins; you will also need to install drivers for the radio, using the installation guide linked here.

Most of the weather satellites that are available in our geographic region are sun-synchronous or polar orbiting, which means that the satellites “pass by” our location from horizon to horizon. There are also some geosynchronous weather satellites (synced with Earth’s rotation to seem stationary), but most of these are located near the equator and are out of range of my antenna. There is a very limited time to download signals from sun-synchronous satellites, as they are moving very quickly and are very far away – about 8-15 minutes per pass, and at an altitude of 520 miles above sea level. Therefore, we need to be able to predict when satellites will pass by our location so that we can be prepared to capture data from them ahead of time. There are several websites with satellite time/location data, as well as a program called Orbitron which has a few other useful features, such as frequency correction for the Doppler effect caused by the satellites moving across the sky relative to me as I receive data from it.

I have used this antenna and radio to download images from the following satellites: NOAA-15 (@ 137.620 Mhz), NOAA-18 (@ 137.9125 Mhz),  NOAA-19 (@ 137.100 Mhz), and Russia’s Meteor M2 (@ 137.900 Mhz). The NOAA satellites use an AM (amplitude modulation)-based system called APT (Automated Picture Transmission) to encode its data transmissions. If you were to attach a speaker to my radio, you could hear beeping and clicking as the transmissions are received, similar to the way in which fax machines sound/work. APT data can be decoded with many programs, including APT decoder and WXtoIMG. These programs convert the APT data into line by line pictures, and also have various enhancement / filtering tools which can be used to manipulate or add additional data to the newly-generated APT photos, such as map overlays. These photos have 2 channels, one with an data from an infrared camera or filter, and another with data from a regular spectrum camera; they also contain telemetry data on the sides of each picture.

Here are a sampling of APT photos taken by the NOAA satellites whose transmissions I captured:

The Russian Meteor M2 satellite uses the LRPT (Low Rate Picture Transmission) method of data transmission. LRPT is modulated with something called quadrature phase shift keying (QPSK), which uses differences of phases in the carrier wave (0º, 90º, 180º, or 270º) in order to send 2 bits of data at a time. It can transmit photo data with higher resolution than can be accomplished with APT, but it also requires a larger frequency bandwidth and generates larger raw files. The signal doesn’t sound like anything intelligible, just a bunch of static. Nevertheless, when demodulated with a plugin for SDR#  (which generates a .s file) and then decoded with an LRPT offline decoder, a higher resolution photo is created – as seen in the photos below. You’ll note that I get images only of geographic locations that have radio contact with the satellite (realtime scanning), and that there appears to be some black lines from missing data; some these are from signal loss, but some are caused by transmitter malfunctions from the satellite.

The meteor M2 photos are from 3 channels which, when combined, create a color photo (red, green, blue); but during night time passes, only black and white photos can be rendered (probably due to the lack of sunlight).

This project has been a fun way for me to learn more about space, satellites, weather, and radio. I was given the opportunity to give a speech at Rutger’s University for their Space Technology Association at Rutgers Club, which can be viewed at  https://youtu.be/qZ1JNfDFjqo. At the end of the speech, I gave the club 2 antennas, 2 USB software-defined radios, and DVDs containing the software they’ll need to record and decode images on their own.

I’ve also started working on a related project: using a Raspberry Pi with an SDR, antenna, and some scripts to automate the data recording process so that I can capture and create satellite images while I’m at work or sleeping. I’m also researching methods of uploading the images to Twitter automatically – because capturing and creating images is cool, but doing that while getting sleep is awesome! 🙂