Recently, I acquired my amateur radio license and joined the Binghamton Amateur Radio Association (BARA). BARA holds meetings and is located at the Kopernik Observatory and Science Center. Among their equipment is a 2 Meter Band Yaesu radio hooked up to a computer with a Terminal Node Controller (TNC) performing digital repeating for APRS or Automatic Packet Reporting System. I worked on a project to migrate their current setup to a raspberry pi and tnc-pi based system, which meant I got to learn more about APRS!

APRS is a means of communicating real-time data, such as weather information from weather stations, station/radio tracking via GPS (Global Positioning System), text messages and more using radio. The radio transmits a series of tones which sound like a modem. The system uses digital repeaters, known as digipeaters, that take a radio signal that is broadcast from another station and repeat it to other stations. Some stations may also be connected to the Internet to relay packets over TCP/IP. Such stations are called I-gates. You can see stations and their positions on the website https://aprs.fi 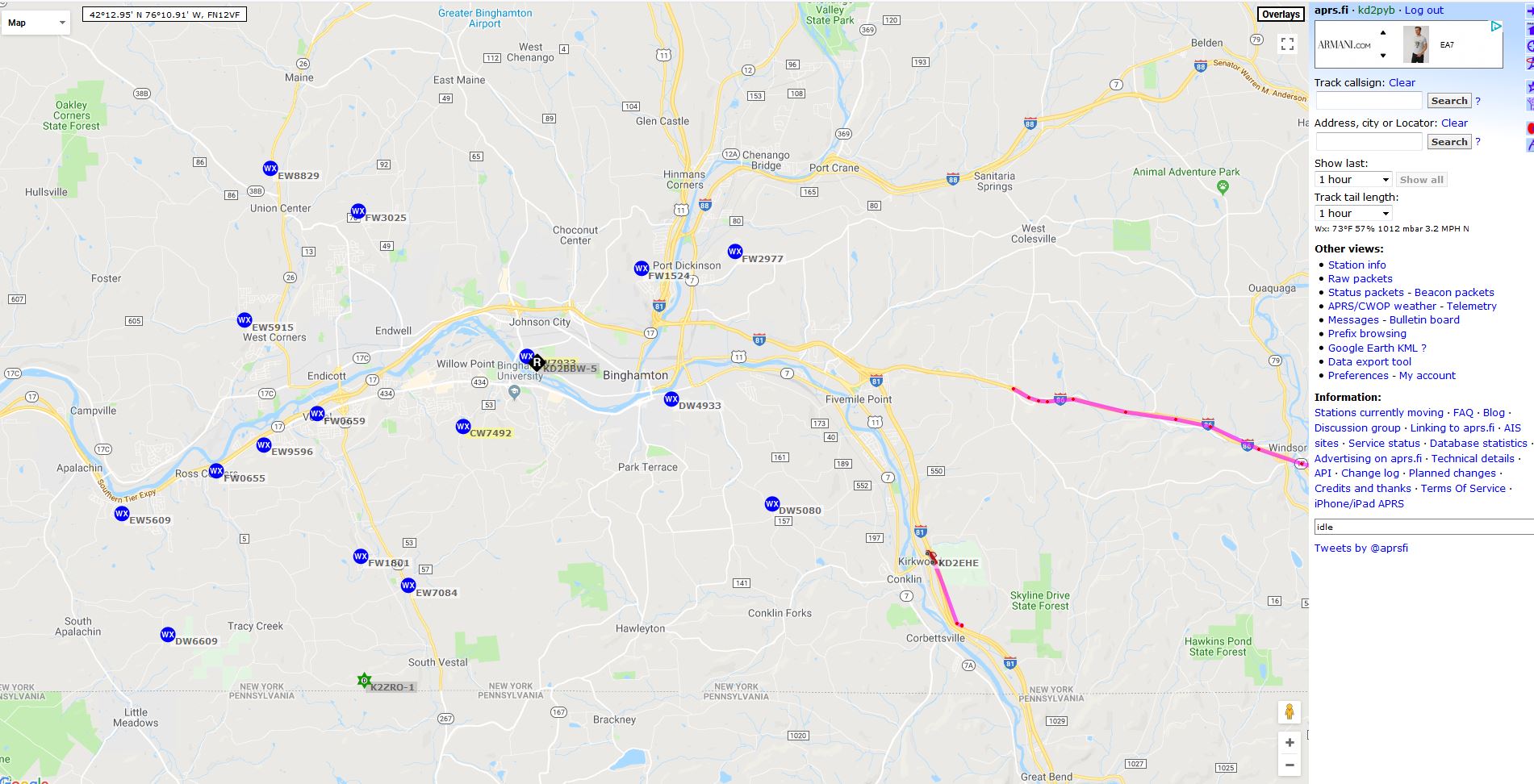 Stations can choose what icon is used to represent them. Usually a blue wx is a weather station. Clicking on the station brings up more information such as current reported temperature, humidity, wind, etc. The weather station reports its data with radio! 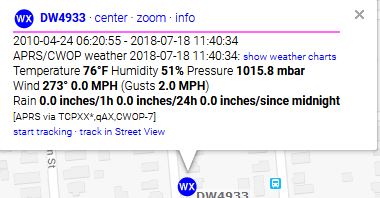 A green star with a “D” in the center is usually digipeater stations along with their callsigns. Clicking on the station brings up other information such as equipment used, comments, last active, packet path, etc. These are the stations that listen for packets and retransmit them. If it is an I-gate, it may recieve packets from the internet and retransmit them over radio. Or an I-gate may “hear” packets on the radio and deliver data via Internet. 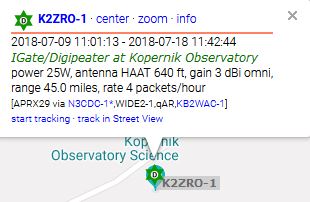 Some stations may use “cars/trucks/phone” as their icon to indicate mobile operation. They may transmit GPS data about their current location which allows aprs.fi to track the station. This can also be used in high altitude weather balloons to aid in tracking for recovery! Sometimes amateur radio operators give comments about what frequencies they are monitoring or talking on, allowing other operators to easily communicate with them. 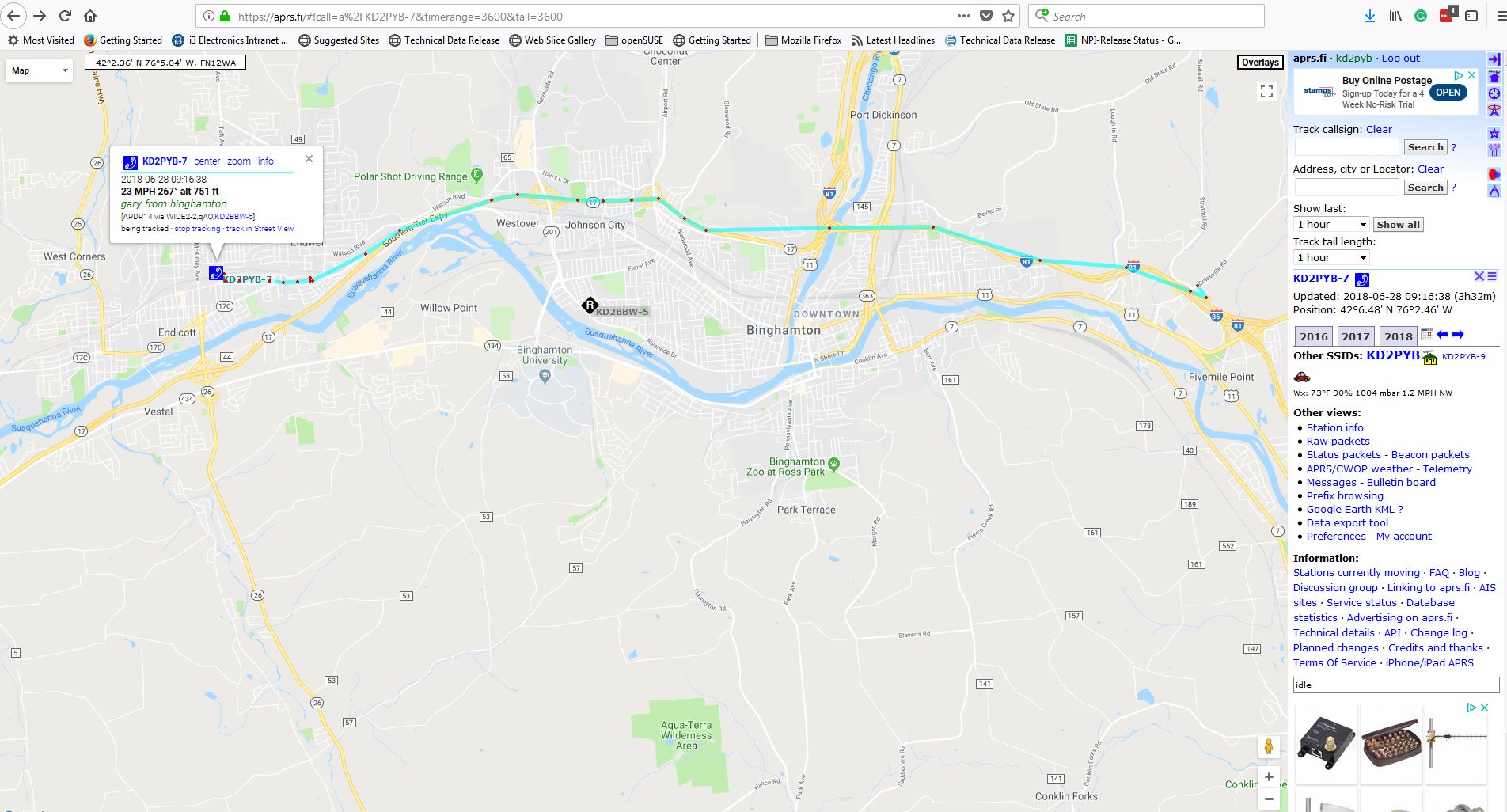 There is lots of other data on this website as well, include messages and raw packet data. Since packets are relayed, it is important to note that messages/data are not private in this system. Also if the recieving station is not “online” or on the air, they will not get the message.

So what other uses are there for APRS besides weather, tracking and finding other amateur radio operators to talk with? Turns out there are a few interesting relays set up. If an operator sends a message to the callsign “SMSGTE” they can send a text message to any cell phone user! Or if an operator sends a message to “EMAIL-2” they can send an email to anyone! This means an amateur radio operator can send text messages/email while not having cell phone service-while on a hike out in the woods for example!

There are even a few digipeaters on satellites and on the International Space Station (although as of this writting the ISS digipeater is not operational)!

I’m still learning a lot about radio and APRS! If you’d like to learn more about APRS, check out http://www.aprs.org/